A little about the Finnish Spitz Society…

The Finnish Spitz Society was founded in 1971.  This was approved by the Kennel Club and the Society was then first registered in 1972. The original membership was around 120 members, and as at 31 December 2016 there were 132 members.

The objects of the Society are stated in the Rules as:

“To make the breed and its qualities more widely known, to assist owners and breeders in every way and to encourage the breeding, showing and judging of Finnish Spitz to the recognised standard of Finland.”

The Committee of the Society consists of up to ten members, and usually they are people who regularly show their dogs.

The main activity of the Society is the holding of two shows each year – a Championship show in the summer, usually in June, and an Open show in the autumn, usually in October.  Cups and trophies are awarded to members at both shows, to be retained until the next following show.  In addition the Society awards annual trophies for the most successful Show winners based on points for each success, mainly at Championship shows.

The Finnish Kennel Club (Suomen Kennelliitto) donated a medallion to the Society to commemorate their centenary in 1989.  The medallion is engraved with a motto, with its translation into English: 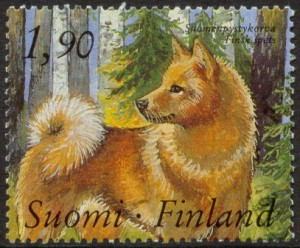 Stamp issued in 1989 to commemorate the Finnish Kennel Club centenary.


Results links for:
Crufts 2020
Other Shows