The broadcast can also be seen on YLE Television news for 11/01/2013 here for a limited time.  It starts at around 4 minutes 12 seconds and lasts for just over 2 minutes (in Finnish).

There is a desire for our National dog the Finnish Spitz to be granted Unesco World Heritage status. The Spitz Club of Finland (SPJ), The Finnish Kennel Club and the Hunters Association are pushing for it.  Finnish Spitz registrations have gone down by a third from their peak years of popularity. 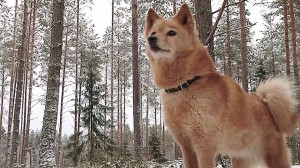 Mr Pekka Teini from Harjavalta is a fanatical Finnish Spitz enthusiast. He judges 216 different breeds of dogs abroad but the National dog of Finland is clearly above all the others.

“The Finnish Spitz is a worldwide curio. It is from a pure strain without crossbreeding  All in all it’s a beautiful dog”, sums up Pekka Teini,

The Finnish Kennel Club, the Spitz Club of Finland (SPJ), and the Hunters Association are now campaigning for the Finnish Spitz breed to be given Unesco World Heritage status.  At stake, besides the bark-sensitive dog, is the whole of ‘Finnishness’.

“The Finnish way of life is based on living alongside the Finnish Spitz.  Over many years, the Finnish Spitz has been a home watchdog. It has brought Finns a living, when it was a great aid to its master in hunting for squirrel skins.  It has been part of the whole way of life” argues Kari Järvinen a dog specialist with the Finnish Kennel Club.

Hunting is keeping the breed going

“However, popularity is not the most important thing.  I am more worried about whether Finnish Spitz will appeal to hunters in the future.  The main point is that the breed will generally remain.  This dog is not only for company” says Pekka Teini.

The Finnish Spitz arouses plenty of interest abroad.  Pekka Teini is constantly answering questions around the world about the exotic dog.  According to Teini, the Finnish Spitz is like a Finnish man.

“We are both stubborn and determined.  We do not flatter one another, except sometimes by necessity.  And you can lose the trust of a Finnish Spitz only once.”


Results links for:
Crufts 2020
Other Shows